Share on FacebookShare on TwitterShare on LinkedinShare on Whatsapp

In the harshest downturn for American workers in history, employers cut an unprecedented 20.5 million jobs in April and the unemployment rate more than tripled to 14.7%.

Joblessness now stands at the most since the Great Depression era of the 1930s after the coronavirus pandemic brought the U.S. economy to a standstill. As recently as February, the rate hovered at just 3.5%, the lowest level in five decades.

Euro zone GDP contracts by a record 3.8% in the first quarter

April’s losses — following a March payrolls decline of 870,000 — erase roughly all of the jobs that the economy had added in this past decade’s expansion and lay bare just how precarious employment is for vast swaths of Americans. The report showed an outsize impact on lower-paid workers as well as women and minorities. 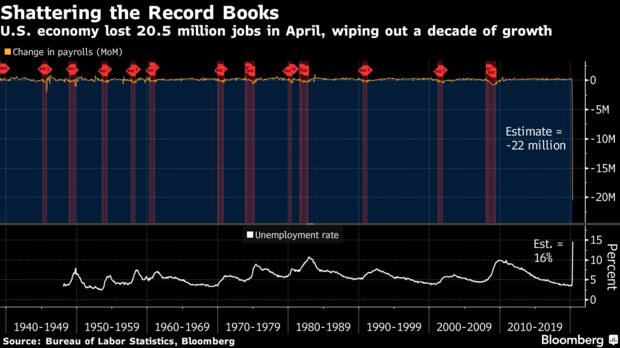 “It’s devastating,” said Ryan Sweet, head of monetary policy research at Moody’s Analytics. “There’s someone behind each of these numbers. It’s going to take years to recover from this. There’s a case to be made that a lot of these are temporary layoffs, so hopefully people can return to work quickly as we begin to reopen the economy — but there’s no guarantee in that.”

With a steep recession now in progress, the destruction of jobs heaps election-year pressure on President Donald Trump to restart the economy and show results by November. But with little containment of a contagious disease that’s killed 75,000 Americans and counting, business is returning unevenly and slowly if at all, and signs are mounting that many employers will be forced to make the cuts permanent.

“The extent of job losses is consistent with Bloomberg Economics’ modeling of a near 40% contraction in real GDP for the quarter. While layoffs were concentrated in sectors such as restaurants, hospitality and leisure, losses occurred in nearly all subcategories. The breadth of job losses is a jarring signal of the massive challenge of restarting vast swaths of the economy — not just a few sectors — and it therefore serves as a stark indication that a ‘V-shaped’ recovery will not be possible.”

Stock investors have largely looked past the dire economic news, with equities rallying since late March. The S&P 500 opened higher on Friday, while the yield on benchmark 10-year Treasuries rose and the Bloomberg dollar index pared its decline.

The data showed average hourly earnings rose a massive 4.7% from the prior month and 7.9% from a year earlier — more than double March’s pace — but those figures were skewed higher by the disproportionate loss of low-wage workers from payrolls, rather than any wage pressures boosting employee pay.

One particular group of lower-paid workers — leisure and hospitality employees, such as those in restaurants and hotels — declined by 7.65 million, almost half of total employment in the sector.

The underemployment rate, which includes discouraged workers and those working part-time who want full hours, rose to 22.8% from 8.7%.

The Labor Department said the unadjusted unemployment rate in April would have been almost 5 percentage points higher if unemployed workers had properly classified themselves, rather than marking down that they were employed but absent from work. Furloughed workers accounted for about 4 out of every 5 unemployed Americans.

The job losses may also fan calls for a fourth round of fiscal aid from Congress on top of trillions of dollars already dispatched, even with signs many Americans are having difficulty tapping the funds. The Federal Reserve is likely to keep pumping money into the economy while leaving interest rates near zero for an extended period.

Trump — who’s polling behind the presumptive Democratic nominee, former Vice President Joe Biden — said Friday that the massive U.S. job losses from the coronavirus outbreak aren’t a surprise and that he shouldn’t be blamed for it.

“It’s totally expected, there’s no surprise,” he said on Fox News Channel, where he was being interviewed as the report was released. “Even the Democrats aren’t blaming me for that. What I can do is I can bring it back.”

While the pandemic has crushed economies around the world, job losses hurt more in the U.S. than in most other developed nations. That’s because about 160 million Americans get health insurance through employers, and without jobs, they could face steep monthly premiums or lose coverage entirely — which may exacerbate the economic impact of Covid-19.

The crisis hit harder for demographics including women and minorities, after they had benefited from the previous tightening of the labor market.

The jobless rate among women jumped to 15.5% from 4%, compared with a 9-point increase among men, to 13%. Among black and African Americans, the unemployment rate was 16.7%; it was 18.9% for Hispanics and Latinos, compared with 14.2% for white Americans.

The quality of jobs also declined, continuing a pre-virus trend. In April, 10.9 million people were working part-time even though they wanted to work a full workweek — almost double the prior month — signaling greater financial stress. That helped push up the so-called underemployment rate, which includes discouraged workers, to a record in data back to 1994.

How fast hiring resumes is critical to the strength of the overall recovery. Already, Uber Technologies Inc., Boeing Co. and U.S. Steel Corp. have announced sweeping layoffs, a sign companies are banking on a slow resumption of growth.

The resulting job insecurity will undoubtedly merge with health concerns to restrain consumer demand no matter how soon businesses restart.

Economists expect it to take time for employment to recover, even if the pandemic eases. Policy makers are also advising caution: San Francisco Fed President Mary Daly told Bloomberg Television on Thursday that “no one who I talk to is looking at a V-shaped recovery — they really think this will be gradual and it will take time to build confidence back up for both workers and consumers.”

Euro zone GDP contracts by a record 3.8% in the first quarter

The euro zone economy contracted by 3.8% in the first quarter, compared to the last three months of 2019, as the coronavirus...

Welcome to Wednesday, Europe. Here’s the latest news and analysis from Bloomberg Economics to help you start the day: The...

The record-long U.S. economic expansion is over after almost 11 years, with what’s likely to be the deepest recession in...

Italy will present a plan this week to ease its rigid lockdown, joining Germany, France and Austria in pursuing a...

South Korean President Moon Jae-in said he’s ordering up a third extra budget to shield the economy from the coronavirus...

Good Budget News on U.S. Relief Package May Be Bad News for Economy

At first glance, it was good news. The Congressional Budget Office said last week that the mammoth economic relief package...

How Bad Might It Get? Think the Great Depression

As the economic carnage from the coronavirus pandemic continues, a long-forbidden word is starting to creep onto people’s lips: “depression.” ...

Politicians Are Running the Economy Now

For a long time, the U.S. Federal Reserve has played the leading role in managing the country’s economy. Its technocrats...

Facebook, Google and Snap have found their knight in shining armor as ad spending craters

No Result
View All Result